When Ubisoft gave the name Odyssey to their latest Assassin’s Creed installment they seriously weren’t joking around. Oh, and when I say this I’m not just referring to the authentic Greek-inspired story line, the sheer number of play hours you’re going to completely enjoy or the humongous map. It’s the outstanding journey experience it offers. Traveling from one Greek region to another, with whales and dolphins swimming alongside your boat is absolutely breathtaking. It’s the journey across the spectacular Grecian landscape, with its majestic marble buildings, volcanoes, autumnal hues and all in between that makes Assassin’s Creed Odyssey out of this world.

However, that’s not all that makes this installment a must-have. This is the first time ever Assassin’s Creed gives you the opportunity of choosing between two characters to play with. Kassandra and Alexios. Deciding who you’re going to use between these two assassins is basically the first action or choice you need to make in this game besides having to tweak difficulty and such. Nevertheless, it’s only the first choice of many you’ll need to make. Whether you’re making your way through the main story mode or diving through one of the never-ending side quests as well as events, you will constantly be making decisions of what your assassin will do.

This is actually why it is so easy for you to grow to love both these assassins individually. Both Kassandra and Alexios are equally spectacular to play with, but, as you play out the game you’ll notice some similar scenes that play through both assassin storylines. It’s like the dialogue doesn’t really change that much regardless of who you’ve chosen. Other than that, everything else seems spot on

The world in Odyssey is not only one of most vibrantly colored, but it’s also the biggest one yet so far in the Assassin’s Creed series. Even though a lot of its overall playground is covered in the Aegean’s sea fickle blue waters, the acreage you can play inside is absolutely humongous. Really, the only thing that can rival this is its sheer breathtaking beauty. The Greece landscape is a fantastic series of picturesque locations. Eternally autumnal forests, white-stone isles, endless beaches, sun-blasted deserts, and the open seas’ rolling waves. All these beautiful scenes come to life thanks to an extraordinary lighting system. 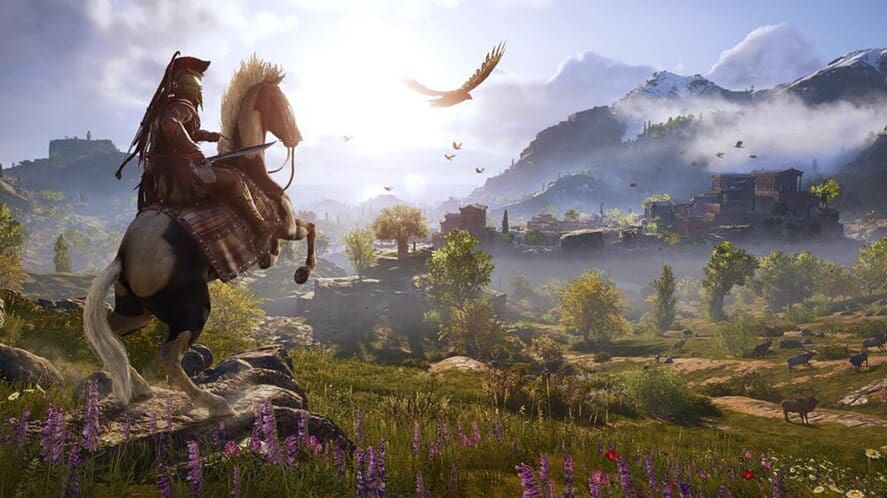 Nevertheless, as with most grand-scale open worlds, just beneath the surface are a few flaws lurking. They range from small immersion-breaking hiccups, for example, draw distance that doesn’t seem far enough to fully capture the view, audio that’s slightly off-sync to textures that arrive moments late. Some of the more severe ones are like getting yourself terminally stuck in one location, your tamed beast abruptly becoming untamed to finding ‘unlootable’ lootable items (if you know what I mean). Such bugs can be extremely annoying most of the time. Fortunately, though, they don’t occur that frequent enough for it to completely ruin your gaming experience.

His And Her Stories

Assassin’s Creed has finally given gamers the chance to exclusively choose whether they want to play as a woman or a man. Siblings Kassandra and Alexios. Game-changing stuff, don’t you think? Okay, it’s true that as far as the main story is concerned they’re basically kind of the same character. However, even though it’s all a bit superficial there happens to be in fact some meaningful differences. One of them being that the voice acting of Kassandra generally feels more consistently well-executed as compared to that of her brothers. 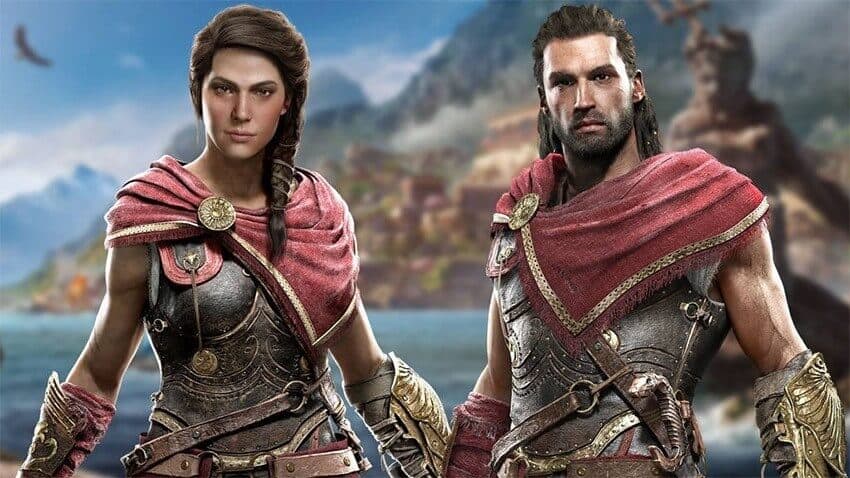 The vocal delivery and accents throughout this new Assassin’s Creed installment are usually either a hit or a miss. It normally falls between decent and outright scenery-chewing. Especially no-name NPCs are concerned. Sometimes, they’re just horrible, to say the least. Fortunately, though, the facial animations and expressions of the marquee characters are amazing. You can even sense the confusion as well as subtle disgust on the faces of the siblings even without them having to spew out a single word. Its saving grace I suppose.

These new heroes are easily some of the most flexible game characters Assassin’s Creed has ever seen to date. Especially when it concerns their individual personalities. The character you choose will be free to become whoever they decide to be.

It’s astounding how different things can be when you make the decision to kill or not. Which brings us to the point about killing. It just wouldn’t be Assassin’s Creed if there was not a lot of killing involved. Combat is something we just have to talk about when it comes to this series. Origins made a gigantic leap towards a considerably more RPG way of going about things, swapping weapons out in order to add nuance to your combat, leveling your character up and a whole lot more. However, Assassin’s Creed Odyssey has come in and dialed all that stuff all the way up.

In fact, it has successfully ironed out a few kinks and quirks the Origin’s system had. Some of these include the streamlining of having several different types of bows. They instead allow you to spec out all your combat arsenal inventory via your abilities. Makes things a little bit easier. All in all, there’s a plethora of exciting new abilities that you can level up as well as power up. The refinement and polish are seen all throughout the combat scenarios with jaw-dropping kill shots and scenes all through the game.

This game is simply a whole lot of fun without a doubt. Yes, it has its flaws but the good outweighs the bad ten times over, in my opinion. Those die-hard Assassin’s Creed fans I‘m sure will agree with me. Prepare to get your mind blown over and over again. Assassin’s Creed Odyssey is beautiful, enormous, thought-inspiring and intriguing even after a grueling forty hours. You still won’t want to let go of the controller even after that long. This is an RPG Assassin’s Creed of unparalleled scale. Something we’ve never seen before from them. Definitely worthy of a two thumbs up, by all means.