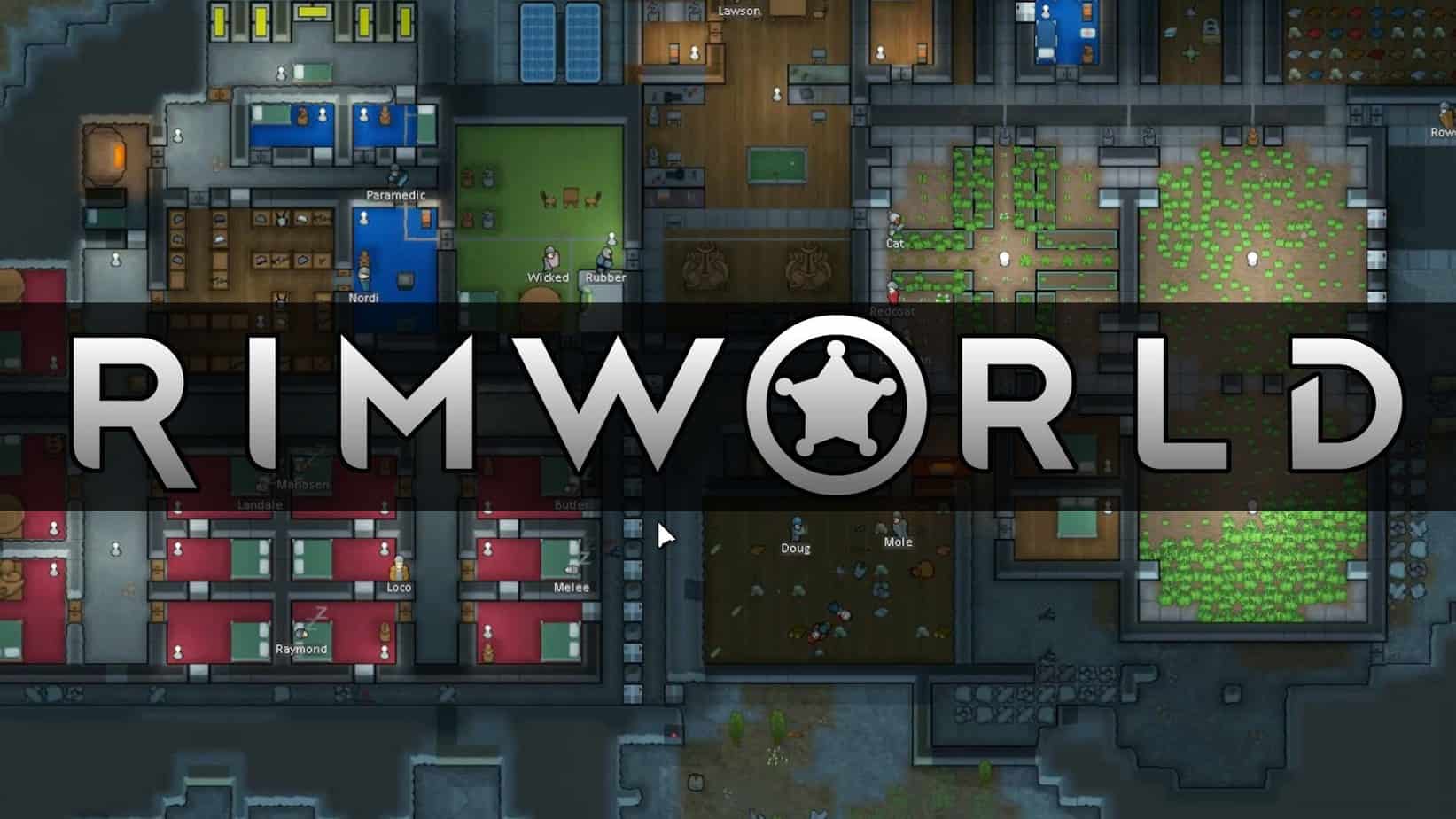 RimWorld is a construction and management simulation game developed and published by Ludeon Studios in 2018. The game focuses on the management skills necessary to ensure the community’s survival.

RimWorld is very popular among the gaming community. Its unique AI storytelling experience and the overall gameplay are the reasons for the game’s massive success.

When talking about games like RimWorld, Oxygen Not Included is probably the top suggestion. The game takes place on a randomly generated asteroid with isolated areas of a favorable atmosphere. From there on, the game is all about the survival of colonists or duplicants, as they say.

The game starts with three duplicants stranded on a distant asteroid. Your aim is to establish a colony necessary to ensure your survival. You can assign different tasks to the duplicants, like gathering resources, crafting tools, researching, etc.

You will also need to monitor the character’s health, hunger, and sanitation. The player must also keep a close eye on the oxygen level and other hazardous gases. The electrical system, plumbing, waste management, oxygen levels, toxic gases, etc. are needed to be managed intelligently in order to maintain a favorable atmosphere.

Oxygen Not Included received praise for its design and progression. However, its ever-increasing complexity raised some concerns. Nevertheless, the game was a success and got nominated for multiple awards.

Dwarf Fortress is one of the most complex construction and management simulation video games. The game features an open-world map with no objectives or storyline. You can play the game indefinitely as long as you want.

The overall feel of the game is a bit outdated. The text-based graphics and unintuitive UI feels like from the 90s. Other than that, the gameplay has some intriguing features that can keep you glued to the game.

You can start by choosing any of the three modes; Dwarf Fortress mode, Adventure mode, and Legends mode. After a lot of calculations, you will enter into a randomly generated world and start your journey.

In Dwarf Fortress mode, you have to build, manage, and defend a colony or fortress of dwarfs. Dwarfs can be assigned individual tasks and can also be trained for particular skills. The game ends only if the fortress gets destroyed or the player abandons it.

Contrarily, In adventure mode, you will control a single character. You can explore the world, complete quests, polish your skills, and fend off yourself against any aggression. You will start from a town and can then switch from fortress to fortress and interact with other NPCs.

Legends mode is a bit different from the above two, where you can interact with historical events. You can examine historical figures, sites, events, regions, and clashes between civilizations.

The game received a lot of positive reviews, getting praise because of its depth and complexity. Minecraft, the best selling game of all time, is also influenced by Dwarf Fortress.

Prison Architect is another construction and management simulation game that offers a similar experience to RimWorld. You have been hired by a for-profit prison company to build and run the day-to-day activities of the prison.

Building a prison, you will have to ensure the availability of all the elementary facilities. Aside from that, you will also have to manage staff, which includes wardens, security, an accountant, etc. You can always hire more staff, depending on the requirement.

There is also a financial side to the game, as it is a for-profit prison. You will have to manage the expenses of the prison and make sure that it is going in profit. Another aspect of managing a prison is that you will have to deal with violence and riots from some prisoners.

Aside from the main game, there are two more modes to play; warden mode and escape mode. In warden mode, you will play the role of a warden, will have a limited field of view, and have to go from cell to cell to maintain order in prison. Whereas, in escape mode, you have the role of a criminal, and your goal is to create chaos within the prison and ultimately escape.

Prison Architect received mostly positive reviews and went on to win the 2016 BAFTA award in the Persistent Game category.

Frostpunk is a city-building survival game released in 2019. In an alternate history, during the late 19th century, a volcanic winter has taken over all the planet. As the leader of the last human community alive, your goal is to ensure the survival of your race.

Starting the game, you are left with a few workers, engineers, and children. With nothing else in sight, your only hope is a heat generator, and you will have to build your city around that generator. To get everything going, you will have to assign individual tasks to different people, depending on their skills.

As the leader of the community, you can make laws and policies to regulate society and increase productivity. Beware that your people are directly impacted by your decisions. Wise decisions will earn you their support, whereas bad decisions will cause unrest.

You can also benefit from technological advancement. You can invest in research to achieve enhanced productivity and faster turnaround times. Robots can also be employed to automate tasks and increase the work rate.

Leadership requires a strong-headed person willing to make sacrifices. Unfavorable conditions like a shortage of workers, and the approaching winter storm, will force you to make tough decisions like allowing child labor, 24hr shifts, etc.

Frostpunk was received positively by the critics. The game got nominated for several awards and won multiple of them including, PC Game of the year and Best Strategy Game.

Planetbase is a strategy and management simulation video game developed and published by Madruga Works. The game starts with a group of interstellar travelers who have decided to settle on a distant planet. Just like in Prison Architect, your role here is of both the architect and the manager of the base.

Starting the game, you can choose from four planets; Desert Planet, Frozen Planet, Barren Moon, and Storm Planet. Do remember that each one has its own natural disasters like sandstorms, blizzards, meteors, etc. and you will have to take precautionary measures against them.

Much like every management simulation game, you will have to take care of all the necessities like water, food, electricity, oxygen, etc. You can assign individual or collective tasks to workers. For example, engineers take care of the construction, medics treat patients, workers do the mining, etc. If needed, you can hire more workers as well.

The role of technology is of prime importance. Advanced technologies can increase the productivity of the base. Robots can be employed to automate tasks. You can also trade with other worlds and can accept more people into your colony.

Planetbase was received positively by the critics. The game has the potential to keep you hooked for hours.

Next on our list of games like RimWorld is Factorio. It is also a construction and management simulation game. The game starts with the character stranded on an alien planet. From there on, the ultimate goal of the game is to build a space rocket and escape. To achieve this goal, the player can do anything he deems necessary.

Initially, you have to gather all the resources by yourself, but as you progress, you can automate all the systems. Making the factory automated is the key here. You can automate tasks like transportation, assembly lines, mining, processing, and manufacturing products.

Apart from running the factory, you will also have to defend it against attacks from the planet’s weird creatures called biters, spitters, and worms. You can deploy weapons like turrets, tanks, etc. to fight against these.

Beware that these creatures will continue to get more aggressive and violent as your factory expands. They will also get more powerful and become difficult to defend against. Their hostile behavior is mainly because of the increased pollutants released from the factory.

Factorio received excellent responses all around. The game was lauded as a manufacturing masterpiece.

Civitatem is like a medieval version of RimWorld. Your goal, as the leader of the village, is to start a new settlement in a new land. You will have to manage your resources, take care of your villagers, and defend against raiders.

Your villagers are your best asset. You can assign tasks to each of them, depending on their skills. Skills will continue to improve with experience. The duties assigned may include cultivating crops, gathering resources, researching advanced technology, etc.

Villagers can also be educated by sending them to schools and libraries. Gaining high education will enable them to perform complex tasks and to do research. You must also cater to the basic needs of villagers, like food, health, shelter, etc.

The village also needs to be defended from raiders and wild animals. They can attack randomly without any reason. So, you have to be prepared for them all the time. Besides raiders and animals, you also need to be on guard against seasonal diseases and natural disasters.

There is also a diplomatic side to managing a village. You will send scouts to explore nearby areas, interact with other communities, trade with them, and develop diplomatic relations.

The game is still in its early access. You can enjoy the game on STEAM and provide your valuable feedback.

First Feudal shares a lot of similarities with Civitatem. The game also takes place in a medieval setting, starting from a small village with limited resources. With no end to the game, your aim is to expand from a small settlement to a large castle.

The game starts with a few peasants, each one having a particular profession. Depending on their expertise, they can be assigned different tasks. Starting off, you can order the peasants to collect resources and craft useful tools and equipment.

Changing seasons offer different challenges. Spring is a time of blossoms, whereas winter is a survival challenge. You will have to go hunting and grow crops in the spring and summer to store food for winter. To fight the cold, you need to build campfires and keep the houses warm.

Another challenge to the community is frequent attacks from bandits and wild animals, and you will have to defend yourself against these attacks. Besides all the challenges, there is a diplomatic side to the game. You can trade with other villages and can send your trade caravans to them as well.

Like Civitatem, First Feudal is also an early access game. You can try the game, enjoy its experience, and provide your feedback.

RimWorld is a highly successful game that is praised by the whole gaming community. Its gameplay, characters, random events, and advanced management features are the reasons for the game’s massive success.

Though RimWorld has its unique features, there are plenty of other games like RimWorld that offer a similar management simulation experience.